From Foxhole Wiki
Jump to: navigation, search
This article may need cleanup to meet quality standards.
Please help improve this if you can. The Discussion page may contain suggestions.

This article may contain outdated information that is inaccurate for the current version (0.41) of the game. It was last updated for 0.10.

This article aims to give an overview of the canonical Lore of the Foxhole with as little conjecture as possible. Any information that has been identified as non-canon will not be included, with the exception that it can be used to illustrate a point or idea that has been identified as canon. This page might not always be accurate, but is an attempt to get the best overview of the state of known lore. You are encouraged to link sources to things stated in this article, or rewrite parts if proper sources are given.

Before we begin, an important quote from Matt, The Foxhole Dev in charge of Lore:

Firstly, any information or item found in the map "Deadlands" prior to the release of the map "The Upper Heartlands" is to be disregarded.[2]

Secondly, there are a few old maps from before Update 0.20 which are outdated. However, these maps could still be used as a reference point for some of the older lore pieces, as well as giving an idea of where some places are outside of the playable area. To see these map, take a look at Lore Maps, and compare these with the current World Map.

Lastly, we need to define what is considered lore? Foxhole lore are pieces of information about the backgrounds or factions of the war as found in-game or the Foxhole website. Lore is made and implemented by the developers, so players have minimal influence on them. It is often represented as special locations, as item descriptions or as unique items. It should be noted that these pieces of Lore as found in game are from fictional characters within the games, which themselves hold certain believes; this often makes individual lore pieces biased to a faction.

Foxhole takes place in an alternative universe, inspired by early 20th century war and technology. The game is entirely fictional. A common misconception is that the game takes place in World War 1 or 2, but the developers of foxhole have explicitly stated that the game is "not [...] a WWI/WWII simulator", but that their intentions are to "make the player feel like they are fighting a war where the combat and strategies are grounded in the world wars."[3]

​The Factions within Foxhole are untied from any real life armies. They do not represent forces like the Allies and Axis from World War 2 for example, even though they might draw inspiration from some of the real life militaries. It should also be stated that neither faction is described as superior or morally better than the other. [3] Although many lore pieces found in the game tend to be biased, the collection shows a broader perspective, with neither faction being better than the other.

The Wardens and The Colonials

The Wardens are the (former) inhabitants of most Caoiva (pronounced "See-va"; the current playable world map). Their uniforms are blue coloured and look inspired by the French WWI uniform [10]. Their former capital was Sun's Haven, but was destroyed in the war and since then the Wardens operate from their off-map capital of Whedon's Row. They are proud of their former general Callahan, as his name can be found in various lore pieces and as map locations. It is known that their nation was a trading nation, and presumably (by the size) an empire.

The Colonials are slightly more mysterious in motives, as they can be described both as invaders or liberators; this ofcourse depends heavily on which side the author of the information is. The colonials wear green and dark tan, with dark green shoulder capes. There are two Legates (=~generals) named for the Colonials, namely Silas and Thea Maro (great-granddaughter).[6] The Colonials are from the south, and are presumed to be from several nations tied in an alliance or confedracy. Locations mentioned are Mesea, Veli, and the industrialized western city-state Dimiourg are mentioned.

Little is known about the individuals that shaped the world foxhole is set in, perhaps because so much of the information and technology of the past has been destroyed or lost to time.

We can discover small snippets of information in the game world, maps and item/artwork description. On the region maps we can see possessive qualities of place names that indicate it was named after someone. I've listed some below but can exclude "Sun" here for now - although Sun's Hollow hints at ownership there is a "Path to the Sun" that it is most likely related to. Other interesting place names have no evidence at being named after anyone. 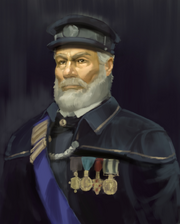 portraitc.png as found in the game files. This is assumed to be a portrait of Callahan.

Easily the most prominent character in the Foxhole, he lends his name to many places and even entire regions. He is mentioned (sarcastically) in Vol.8 of Inner Haven as the Warden's "great" leader and two mounted statues in his likeness can be found flanking the Abandon Ward's southern bridge. The plaques describe how Callahan led the Wardens to economic prosperity, and suggests diplomatic and militaristic prowess.[11] Callahan is depicted on a horse wearing a general’s uniform with a full beard and wears a sword on his belt (which possible gives its name to The Blade and Pommel Annex to the west of Callahan's Belt).

Silas Maro is a Legate of the Colonial Legion who is credited as being to first to walk on the ruins of the Bulwark following the Breach. His great-granddaughter is Thea Maro. Silas was assassinated during the battle of Sunhaven (now known as Abandoned Ward).[12]

Thea Maro is the great-granddaugther of Silas Maro. She is raised to be "an expert tactician" and has "exceptional natural gifts". She would ultimately lead the Colonial army to take the center of the Warden's empire. How effective she was is disputed, as Inner Havens praises her for her "swift and decisive leadership"[12], some have doubts about her true capabilities, such as Christos.[15]

It is assumed that Thea has lead the Swords of Maro herself. At some point, she is awared a position in the "high council representing Veli", but she refuses and stays in the military.[12]

The Smuggler is a nickname of a character found in lore. He is an enterprising individual who operates a smuggling network between the north and south of the continent. Part of his wares can be found at Smuggler's Cove and Smuggler's Fort. Among wares smuggled are jerky from Fisherman's Row and tobacco from Therízo. It is unknown whether the Smuggler is still alive to date.

A Warden stowaway, she killed two colonial guards with their own knife to make her escape to Westgate, planning to steal a truck and escape north via the Heartlands she plans on returning to Fisherman's Row with reinforcements to save the other captives. Left a note for colonials next to a burnt out logistics truck under the alias "M". 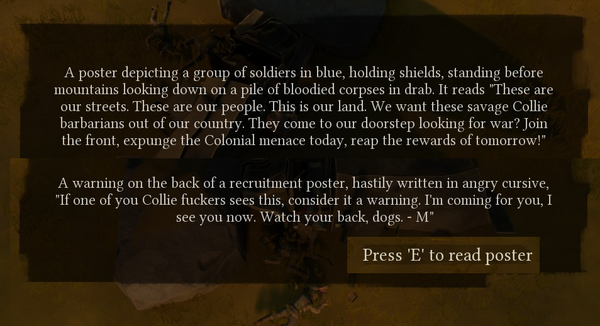 The author of the volumes of Inner Haven, with presumably at least 12 volumes having been written, only four have been recovered so far (Inner Haven - References)

A Colonial who developed the H-Class Hatchet "H5" Light Tank during the Boreal Wars (H5 desc). They came from an "industrialised western city-state" called Dimiourg.