From Foxhole Wiki
(Redirected from Port Base)
Jump to: navigation, search
Versioning

This article is considered accurate for the current version (0.36) of the game.

A static base is a structure located in all cities, towns, and some farms. It has a predetermined location unlike the Forward Base.

When a new war begins, a few Static Bases start in the 'destroyed' state. They can be rebuilt with a Construction Vehicle. By rebuilding a base a faction claims it for themselves. During the war, one faction may take an already claimed base from the other by destroying and rebuilding it.

Several facilities can be constructed in static bases by submitting Upgrade Parts to the base. Once the small garrison facility is built, the Garrison Camp can be upgraded to a Garrison Base (Tier 2

) with a Construction Vehicle. Before upgrading to Town Hall (Tier 3

) the large garrison facility has to be built. Certain towns are "victory condition" towns, indicated on the map by a faint gray circle around the town's base

. To win, a faction must upgrade a specific number of these towns with a Civic Center

. This number can be reduced if Victory Condition towns are permanently destroyed by rockets.

Defensive buildings placed within a radius of 150 meters around a static base with Operating Post facility built have their AI activated and will engage enemies. Defensive buildings will decay slowly unless in range of a base with a Garrison Facility built and stockpiled with Garrison Supplies. Bunker Supplies can be used instead but they only prevent decay of bunkers and trenches.

Bases can be chosen as respawn points and require S. Supplies for players to spawn at them. If a Player chooses to respawn at Home Base instead of selected one, that selection gets removed. When a Static Base is destroyed items in its inventory will drop on the ground nearby. If the team who owned the base rebuilds it, it retains all the stockpile and facilities. If the enemy team rebuilds it, the base loses all facilities, all soldier supplies, and half of the stockpile.

Bases can be Stockpiled with crates built at a Factory. To submit crates, right click a crate in your inventory and choose Submit to Stockpile (or Submit all to Stockpile if you have multiple crates and want to submit all). Alternatively you can place the crates in the Static Base inventory (top left) and then click Submit to Stockpile. Players can then assemble items in personal quantities by accessing the Static Base and clicking on items from its large inventory on the right side of the screen.

Players driving some vehicles, including Transport Trucks and Light Utility Vehicles can access the base without leaving their truck. They can submit items to the stockpile and pull items in triple amount with shift+LMB for quicker deliveries, or just to help other players assemble items faster. Assembled items that exceed truck's inventory limit will be dropped under the Truck.

When a new war begins, these bases are stockpiled with Rifles, rifle ammo, Radios, Wrenches, and Soldier Supplies only.

The Garrison Camp is the first tier of static bases.

The Garrison Base is the second tier of static bases.

The Town Hall is the final tier of static bases. 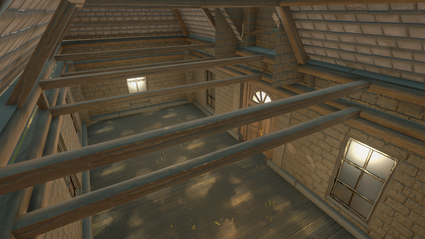 Inside a Town Hall
Retrieved from "https://foxhole.gamepedia.com/index.php?title=Static_Base&oldid=23395#Port_Base"
Category: