IMPORTANT: This is a massive update that overhauls the main game modes for Foxhole and provides a new foundation that the game will be built on in the future. Before proceeding, please read this important post: Introduction to the new Foxhole

When you enter the game for the first time, press "Join the War" option after pressing "Play" from the main menu to enter the persistent war. 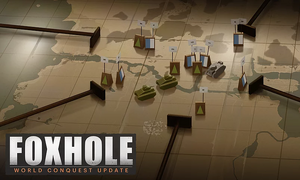